Coinomi doesn’t use SSL for their communication from their Android app to their backend servers. When you open the app, all of your wallet’s addresses are sent in plain text across the internet. Luke Childs noticed and pointed out the glaring security/privacy issue politely via GitHub. Coinomi refused to admit it was a problem. Twitter, Reddit, and GitHub hilarity ensued.

Coinomi appear to be in disaster recovery mode and are deleting public comments. Don’t worry though, Luke and I expected this, so we took screenshots of everything and made snapshots of the GitHub issue on the Wayback Machine , so you can see what was deleted so far and if they delete anything in the future.

All times in GMT

There are more hilarious comments from both sides, but I’ll leave it at that because it provides more than enough context/background to continue. Let’s move on to why all of this matters from 3 perspectives: security/privacy, legal, and general corporate behaviour/image.

Cryptocurrency users have the right to keep their public addresses private. Due to the lack of SSL, all of your Coinomi wallet addresses are broadcast in plain text whenever you so much as open Coinomi on your phone. You can get around this by using a VPN, but you shouldn’t have to in the first place – the functionality needed to keep things private and secure is already integrated into the open source software that Coinomi is using on their backend servers. They literally just need to create a certificate and wire up the config settings. That they haven’t just done that is shocking! Any competent sysadmin/devops could have this resolved in under an hour. Again, the time and cost to fix this is infinitesimally small. As you can clearly see from the screenshots above, the people have spoken on this one – whether Coinomi want to admit it or not, this is a huge privacy and security concern for their users.

Disclaimer: I am not a lawyer. This is just my interpretation of things. Happy to edit if anything is wrong/misleading:

In the UK, when data has been leaked and it’s your company’s fault, you have to report it to the ICO (Information Commissioner’s Office). You generally have about 24 hours to report from the moment you realize that a “data breach” occurred. If Coinomi refuses to acknowledge the leak, they might be able to skirt around this law. Publicly admitting that data has been leaked would be quite a liability for them. I think this could be the reason that they acted so strangely about everything. Data protection laws in the UK are quite strict, and if you run afoul of them you end up in a whole heap of legal issues. Again, I’m not a lawyer, but I can’t think of anything else to explain their bizarre reaction to their community trying to make their platform more secure.

It’s worth noting that the ICO states SSL configuration issues are frequent in their data breach investigations: 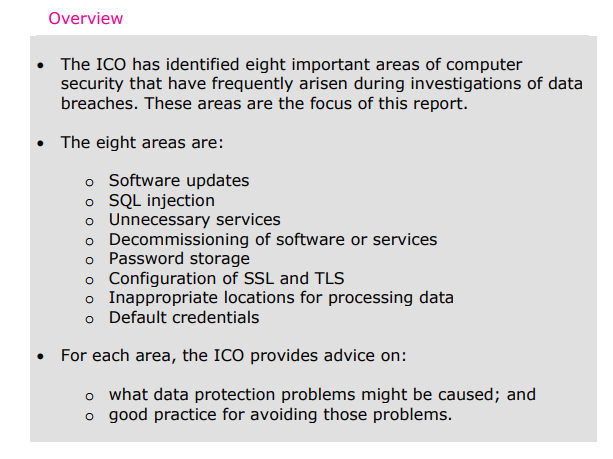 The Tweets speak for themselves. This is not how a responsible corporation deals with a security concern or treats their users generally. The Tweets they came out with came across to me and many others as extremely childish, which is not the attitude I want in a company that creates software that literally holds my money. Coinomi really need to clean up how they do deal with the public. The people that do it for them now are clearly not well trained enough for the job. They also have no way that I know of to report security vulnerabilities, which is a bit concerning considering the type of software they make.

As of writing (29 September 2017), Coinomi still haven’t admitted that this is a problem and have provided no ETA regarding when it will be fixed.

Coinomi market themselves as an open-source wallet, but they are clearly not:

The title of their site literally says Coinomi is an open-source wallet, but their Android source code hasn’t been updated in months (although newer versions of the app have been released on the Google Play Store):

Even more worrying is their attitude towards OSS as a whole:

This is not how open source works. They also use open-source software to support their platform, and they may be running afoul of these products’ licenses. I’ve not had time to properly dig into this, as the main issue I have is with Coinomi’s handling of the SSL incident, but perhaps an open-source buff can take over the investigation on this front and see what else Coinomi have managed to make a mess out of? If you uncover anything and don’t have the time to write about it, feel free to pass the information over and I’ll make sure you get full credit for everything I publish about it (or not if you want to remain anonymous).

A Personal Note About Luke

Luke is one of the biggest OSS buffs I know. Just check out his GitHub, it speaks for itself. For example here’s his PR to add RFC-compliant caching to an OSS project that gets 8 million downloads per month. These are not small, insignificant things he’s doing. He genuinely cares about OSS projects, and often fixes issues in projects himself, but in this instance he couldn’t because Coinomi’s code isn’t open source. He cares not only about the code he writes, but also the community that uses that code as a whole. That is why he responsibly reported this issue to Coinomi, and is also why we later pushed the issue after getting no response. There has to be people like Luke out there checking that things are actually done securely and follow best practices. Luke should be thanked for that by Coinomi and the community as a whole. We need more people like Luke. He spends the vast majority of his time working for free. He didn’t ask for me to put this in here, but I think we should all show him our support in order to encourage this behaviour in others and to thank him for bringing this to our attention. Here’s one of his public Bitcoin addresses: 1FT2kF87rWxn2mvQViW14BvuXFb1MSyRAR. When I asked him for it, he literally said, “oh… I didn’t even think of that.” That’s who Luke is.

Although the majority of Luke’s time is spent on open-source projects, he does occasionally do freelance work so he can buy food and pay his rent. If you’re interested, you can contact him here for work requests: lukechilds123 {at} gmail com.

Luke uncovered this and did all the real work, so let’s put him first. If you like what he did and want to show your support, feel free to follow him on Twitter.

The above is to be considered opinion and not investment advice in any way, as an unbiased media, no one interferes with the Editorial content of CryptoInsider.com, writers have freedom to choose their own direction, members of Crypto Insider do not participate in trades based on content.

Like what we wrote? Donate to us today so we may continue to write!
BTC: 1HozPdTTJahPigLXwMShErhubZLobBhFPL
ETH: 0xDf4d2529D777a80717E85Ed2269830ad6265951B
LTC: LMT3LCbCSvActkVo4dgzbHjn1HPrCgKch2
BCH: 17sFsLgZq9jibtqi5Bo5SiUcCD4TG8RQwE

Binance in quest of controlling the entire crypto market?

0
Binance, the world’s largest cryptocurrency exchange, has been receiving a lot of attention lately after it announced that it was launching the Binance Chain...
Read more
Bitcoin Events

0
Tech expert and influencer John McAfee says he knows who Satoshi Nakamoto is, and will reveal that identity, via clues over time. Here's what we know so far.
Read more

This site uses Akismet to reduce spam. Learn how your comment data is processed.

Vlad Costea - April 23, 2019
0
On April 16th 2019, eToro founder and CEO Yoni Assia has agreed to do an exclusive interview for Crypto Insider at the Paris Blockchain...

Crypto Insider is brought to you by Crypto Taco, a blockchain and crypto marketing team.

Alessio Rastani: Bitcoin currently is testing 200-day MA on this one chart

0
Bitcoin clearly surged through the 200-day MA during its April 2 pump on TradingView charts. One influencer, however, pointed out a much different chart.
Read more

Why Richard Heart’s Bitcoin Hex is a scam

28
What if Bitcoin was an ERC20 token on the Ethereum blockchain, didn't require its own hardware to secure the network, and had its entire...
Read more